Welcome a New Face to TWRP! 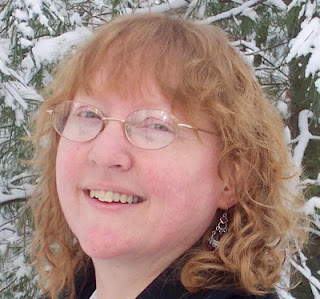 The Wild Rose Press have done it again! They've unearthed another wonderful writer and helped her along the road to publication. I can't wait to dive into the pages of Kat's Fifty-eight Faces and indulge.

Kat has kindly offered a copy of her debut novella to one lucky commenter. Make sure you're in to win, but in the meantime, lets learn a little more about this latest Jewel of a story.


How long did you give yourself to write it?
I found out about the call for submissions in November 2009. Since the deadline was the following March, I gave myself until the middle of January to write it and another few weeks to edit and polish. I saw it as a challenge to be able to pretend I was writing on deadline to see if I could measure up against published authors with real deadlines. Funny that this self-imposed exercise led to my debut publication!

What was it like writing for a series? Where did you come up with the idea for the plot?
The series guidelines were pretty clear and none of the other books in the series had been released yet, so I was on my own for ideas without knowing how similar I'd be to others who answered the call. The idea for the plot came from a long drive in the car with my RWA chapter mates. There were four of us in the car and we all bounced ideas around, each coming up with scenarios and characters that fit them.

How smooth was the publishing journey and was it different to others because of the tighter deadline?
The publishing journey was pretty smooth. I submitted the manuscript and promptly forgot about it and went back to work on other projects. I was surprised to get an email from an editor asking for edits. I immediately dove into the edits and reviewed them with my critique partner. My editor, Anne Seymour, was good about establishing deadlines and great with suggestions and ideas. I didn't find it difficult to meet the deadlines at all and I must credit Anne with really making the story shine.

Favourite part of the book/favourite character? Why?
My favourite part of the book is the motel scene where Evan and Caroline have to come to terms with their new relationship as partners, and come up with a plan to defeat the villain. I like this scene because they are each able to give in a little and let the other person into their private world. It could have been a very long drawn-out tense scene something like group therapy, but I interjected a bit of humour that fit their independent personalities.

Anything else you'd like to add : )
It's an honor to be a small part of such a fantastic group of authors. I hope my fellow Jewel of the Night Series authors had as much fun as I did in writing these wonderful stories. I'd like to celebrate my debut release by giving a copy of Fifty-eight Faces to one commenter. And I'd like to invite readers and writers alike to visit me on the web:

Blurb:
Jewel of the Night Series
Chief of surgery at a small children's hospital, Caroline's last hope to save it from financial ruin evaporates when she loses the Blue Diamond case to greedy Evan Quinn. When Evan buys the hospital property for high profit condo conversion, Caroline's hatred shifts into full red-alert.
But Evan is not her real enemy. Rolf, the hospital's chief administrator, has had his eye on the blue diamond since he learned of it from his Nazi grandfather. To be the 58th face to possess the Blue Diamond, one for each of its facets, grants the owner unlimited power. Rolf plans to kill the current owners and use the diamond to build his Neo-Nazi regime. Can Caroline give up her hatred and Evan his greed before Rolf kills them both? 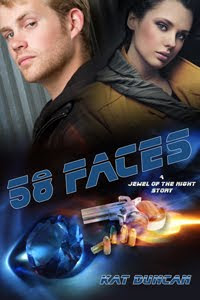 Excerpt:
"If I wasn’t sworn as a doctor,I’d pull this trigger.”
A flash lit the darkness. An ear-shattering echo reverberated in the concrete vault. Evan staggered. Caroline dropped the gun, and its over-sensitized trigger fired again. It spun like a top on the concrete. She rushed forward.
“Evan. Evan. Are you hurt? Where? I didn’t pull the trigger. It just went off in my hand.” She grabbed his shoulders, bracing him, scanning him for a wound.
He steadied himself and pushed her aside. “You missed.” He stared at the gun lying on the floor. He picked it up and hefted it, his brows pinched in thought. Pointing it away from her, he firmly grasped the weapon and gently tapped its side. It fired.
He turned on her, his mouth thinned into a grimace, his eyes squinting.
She put up her hands. “Evan, don’t…”
He tipped the gun toward the ceiling and, with a snap, removed the clip. He tossed the pieces in opposite directions. They spun and clattered on the concrete floor. In a few quick steps, he closed the distance between them. His broad hands engulfed her shoulders, infusing her shivering body with a surge of solid warmth.
“That gun was rigged by an expert. An expert who arranged for us to meet here. Then disappeared.”
Posted by LaVerne Clark at 6:10 PM