On the Trail of Another Hot Read

The winner of Kat Duncan's Fifty-Eight Faces was Sarah Grimm. Congrats Sarah and happy reading! Thanks for commenting : ) 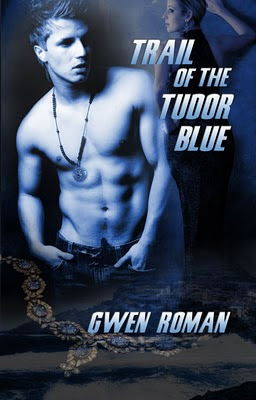 Yummy! What a great cover don't you think??

Today on Novel Natterings, we have Gwen Roman here talking about her debut romance, "Trail of the Tudor Blue"
Sounds like another great read from the Jewel of the Night series!

Blurb:
Everyone deserves a happily ever after...
For straight-and-narrow art restorer Ardis Bellamy, a trip to the South of France to reclaim a historic blue diamond necklace should have been only mildly nervewracking. Understatement. In order to succeed, she's going to have to learn whom she can and can't trust, give the thugs who are chasing her the slip, and decide whether her growing relationship with sexy "recovery agent" James Tate is worth risking everything for -- or whether he's been double-crossing her all along.

Excerpt:
He half-grinned, cocky and endearing.

And between the charm of his grin, the shift of his muscle, and the blue of his eyes, all manner of improper things rolled through my imagination. I needed to get away before the temptation overwhelmed me.

I shifted my hand to his chest and pushed. “Let go of me,” I said. But he stood fast against me, and he didn’t miss a beat in the music.

“Quit it,” he said. “Try a little common sense for a minute, huh? If I had any ill feelings I would have left you to Ahnshen’s wicked ways. And if I wanted to hurt you, you never would have left the Babette. Relax. Dance with me.”

I couldn’t have relaxed if I tried. There were too many unknowns, too many questions knocking around my brain. “What do you want?”

“Why are you following me?”

“I would have thought that was obvious.”

I became again aware of the heat of his body, of the enticing scent of him. The beat of the music coursed through my veins and set my body in motion in time with his. A thrill I hadn’t experienced in far too long filled me, but I was in the wrong time and place to lose myself in its rush.

Gathering my wits, I leaned back to look Tate in the eye. “Tell me,” I said.

He smiled, slow and soft, and his eyes, though warm, lacked mirth. “I’m looking for Marco.”

I raised one eyebrow at him—not on purpose. The one eyebrow action was a twitch, a failure to raise two rather than a skill. “Join the club.”

Phew! Great excerpt and I love the sound of Tate - mmm, mmm!
What was it like writing for a series? Where did you come up with the idea for the plot?
My experience I’m sure was a little different than most of the other Jewel of the Night authors’. At the time I saw the submission call, I was fortunate to already have a romance manuscript featuring a blue diamond! The story had seeded in my mind during a visit to my local library. I can’t even remember what I was researching at the time, but I looked up from my table and a book on gems and jewels caught my eye and seemed like the perfect break from what I was doing. Flipping through the book, I came upon the photo of an historic necklace that stopped me cold. The piece is called The Spanish Inquisition: 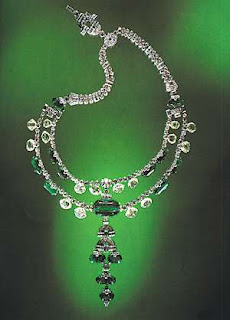 That was the inspiration for the necklace Ardis and Tate are after TRAIL OF THE TUDOR BLUE – only with blue diamonds as opposed to emeralds. The necklace took firm hold of my imagination, and didn’t let go until I’d written “the end.”

How long did you give yourself to write it?
Since the manuscript was already written, the writing wasn’t the problem. Editing it down to work count – and getting rid of a lot of pointless or repetitious scenes – became the challenge. I gave myself three weeks to edit, and then begged some friends to read the revised version as quickly as possible. While they were reading, I queried Wild Rose Press with the project and had made adjustments per reader feedback before Wild Rose requested the full.

How smooth was the publishing journey and was it different to others because of the tighter deadline?
With TUDOR BLUE being my debut romance, the only publishing journey comparison I can make relates more to my day job (scientific and technical journals publishing). We often have 24-hours to turn around an article and get it published online. So for me, I had zero sense of a tight deadline. The biggest adjustment, though, was dealing with a production schedule that had some flexibility built in – huge culture shock for me!

Favourite part of the book? Why?
Oooh. That’s a tough one! There are so many moments in the book that I adore (am I allowed to adore my own story? Hmmm…) Absolutely! : ) I adore the moment Ardis goes through Tate’s traveling bag. I adore the bit where they’re walking along the streets of Marseilles. I adore their first kiss. Probably, though, my favorite scene is with Ardis and Tate sitting side-by-side on the back of the Babette, his hand on her thigh, and the necklace on the table in front of them. It’s the point where they come together for a united purpose and the glimmer that maybe, just maybe, these two very different people could find a future together. Ahhh, I guess I’m a romantic at heart, huh?

But that brings up an interesting question for the blog readers here. What are some of your favorite moments in romance novels or movies? At what point do you know the hero and heroine are destined for one another despite the odds?
Posted by LaVerne Clark at 9:53 PM