A new Jewel of the Night story

I was so excited to see a new release in the Jewel of the Night series. Not only is the series close to my heart because this is the home of my own debut novella, but because each and every story I've read so far has been fabulous. I've been taken to countries all over the world, been transported to different eras and the characters in them are all unforgettable from the worst villain imaginable to the most delicious heroes. If you love books to keep you on the edge of your seat, yet thrill you with sensual love scenes and real emotion, I guarantee this series will not let you down.

Lets hear a little about the newest release titled, Blue Ice by Donna Dalton.
Hi Donna, lovely to have you here. Tell us a bit about yourself and your latest release.

I’ve been writing for The Wild Rose Press since 2007 when they contracted my full length historical romance, IRISH DESTINY. Since then, I have published two other historicals and several novellas.  When the call came out for the JEWEL OF THE NIGHT series, I was intrigued.  Although historical romance is my first love, I enjoy reading and writing contemporary romantic suspense.
Writing for this series wasn’t difficult at all. The requirements were quite simple; they wanted stories that involved thieves, a blue diamond, and a high level of danger. It didn’t take long for me to hit upon my story idea. I remembered watching a television series called IT TAKES A THIEF, where reformed thieves staged break-ins that were filmed and shown back to the home-owners. I started asking myself “what-if”, and soon had a basic plot formulated.

Although there was a deadline for submitting to the series, the journey to get this story published went smoothly. I set weekly goals and paced myself and soon had the manuscript ready for submission. Not long after, BLUE ICE was contracted.

My favorite part of BLUE ICE is when Addison realizes she’s been pushing away the one thing she needs – Garrett. From the beginning, she fought her attraction for the Texan. Everyone she ever loved had betrayed her. Why would Garrett be any different. Yet, as they work together, she begins to see that he is nothing like all the others. He’s loyal and kind and puts her safety before his own. Loving Garrett is like coming home after a long journey, and she finds she’s ready to open her heart and let him in.

In keeping with my love of romantic suspense and historicals, I am currently working on a story that combines both. It’s set at the end of the American Civil War when emotions are running high after the assassination of President Lincoln. The hero and heroine become embroiled in the search for the killer. It’s an exciting story to write, and I can’t wait to get it finished so readers can enjoy it.

I can be reached through The Wild Rose Press at www.thewildrosepress.com or on my website at www.donnadalton.net.  I’m hosting a contest on my website where the winner will be awarded a $10.00 (ten dollar) gift certificate. Stop by and give me a holler J 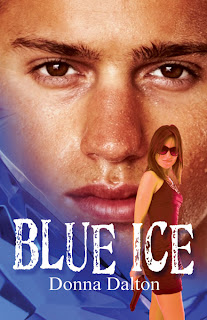 Garrett Powell only signed on for the TV show to satisfy a debt and get his life back on track. Fellow inmate Jimmy Patterson once saved his life and in repayment, Garrett agreed to secretly look out for Jimmy’s protégé, Addison. But Addison’s spunk and intelligence soon have Garrett wishing there could be more between them.

When a rare blue diamond necklace they stole for the show goes missing, Addison and Garrett have to join forces to clear their names. With gun-toting thugs and the law after them, can they find the jewel—and each other—before it’s too late?


EXCERPT
Body heat and the spicy scent of aftershave enveloped her. Her pulse revved like an engine on nitro. Garrett Powell. For a geeky security alarm system analyst with a short rap sheet, he was good. Damn good. She hadn’t heard him approach. Hadn’t even heard him while he looted the upstairs bedrooms. Was she getting soft?

She pulled a box off the closet shelf and returned her focus to the task at hand.  “Are you finished upstairs?”

She lifted the box lid and pushed back the lavender-scented packing paper. Italian leather gloves and silk scarves. Excellent quality. “Only this closet left.” She dumped the contents of the box into her sack. “Did you find anything worth taking?”

“A couple of Louis Vuitton purses and a pair of Manolos. Excellent condition.” His southern accent gave the renowned brand names a comical twist.

She smiled, amused, an emotion she’d been short on lately. “Anything else?”

“Some electronics...two cell phones, a Blackberry, and an iPod. And a nice vintage coin collection.”
The Texan knew his hot commodities. “Jewelry?” she asked.

She bit down on a curt reply and shoved the box onto the shelf. No need in getting her temper up.
She’d have to get used to such comments if she wanted to work with him in the future. The Texan had discovered her Achilles heel and appeared to enjoy poking at it.


Thanks so much for stopping by Donna! Don't forget to visit Donna's blog for the chance to win a gift voucher - good luck! : )

Posted by LaVerne Clark at 3:31 PM