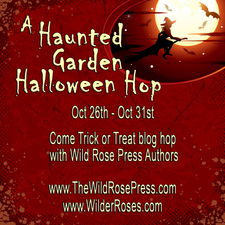 Welcome to my stop on the Howloween Blog Hop AND A Haunted Garden Halloween Hop. Yep – that’s right. TWO stops rolled into one. I’m a true multi-tasker! J Actually, it’s because I’m a terrible multi-tasker and rather forgetful at times that I forgot I’d signed up for two!)


Just let me know when you comment which hop you’re on, along with your contact email – because I’m giving away one prize to a lucky commenter for each stop! (Just quietly, there’s nothing to stop you from writing TWO comments to double your chances)


The prize is a choice between a PDF copy of either Guardian of the Jewel OR Affinity.

I thought about regaling you with a story or two of my own scary experiences with the spooky kind in honour of Halloween, but then thought you might think me kookier than ever J So, instead, I decided to send you on a quick ghost tour of my country instead.


I came across this gem of a list written by Kirsty Johnson from the Stuff.co.nz website who has kindly allowed me to reproduce her awesome list. Enjoy – and have a Spooktacular Halloween J

1. Kingseat psychiatric hospital, Karaka.
Kingseat is a former psychiatric hospital where many patients claim they experienced maltreatment, and a number of patients died during their time there. Its reputation for hauntings spread so far and wide it is now run as a "haunted house" tourist venture by a company named Spookers.

2. Racecourse Hotel, Riccarton.
The ghost of former licensee Donald Fraser is said to walk the corridors of the hotel looking for his killer.
According to The Encyclopedia of New Zealand, in 1933 Fraser was killed in the middle of the night in his bedroom, where his wife was asleep, by two blasts from a double-barrelled shotgun.
The movements and circumstances of everyone in the house at the time, and of guests at a party held in the hotel earlier in the evening, were checked and rechecked but no one was ever found guilty of the murder.


3. Larnach Castle, Dunedin.
New Zealand's only castle is reportedly haunted by several spirits including the William Larnach himself and one of his vengeful wives.
Larnach shot himself in the head in 1898 after learning of an affair between his young third wife and one of his sons from his first marriage.
Both the first and second Mrs Larnach’s, who were half-sisters, died in the castle at age 38.
Larnach's daughter Katie is said to haunt the ballroom, built to celebrate her 21st birthday in 1886. She died just a few years later from typhoid. 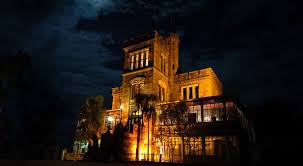 This is New Zealand's most haunted hotel.
Bathtubs reportedly drip blood, orbs bounce around the driveway and a Maori princess is reputed to stalk the corridors, according to Theshadowlands.net.
The website says some people have experienced the dining room going cold, laughter, the feeling of 'something' walking through them and even the noise of a maid's trolley going along the long stretch of hall in the lower part of the hotel.


5. The Vulcan Hotel, St Bathans.
The Vulcan is haunted by the ghost of a murdered prostitute named 'The Rose'.
A review of the hotel from Suite 101 says the tale begins when, one evening in the early 1880s, The Rose invited the wrong customer back to her room.
Her body was found the next morning on the bed where she made her living. Her killer was never caught. She now haunts the room where she was killed, targeting male guests with her nasty nocturnal visits.


6. The Abel Tasman coast.
This legend dates back to the late 1820s when Maori chief Te Rauparaha and his allies sacked the Waimea pa in Appleby, and found the hiding place of the magnificent waka Te Awatea.
A Nelson Evening Mail article says a phantom Maori canoe, with a warrior crew chanting, can be seen in the area on still nights.
Sightings of the canoe are often accompanied by the sound of wailing women, representing the laments of the Ngati Apa people as their beloved waka was paddled away.

7. Waimate Hospital, Waimate.
Waimate Hospital is closed, but a tortured spirit dwells within.
It is the Grey Lady, and she is restless. The Christchurch Press wrote about the haunted hospital in 1996, saying locked doors were found open, the sound of breaking glass was reported but nothing found, and ambulance officers had told of disturbing encounters with a spirit.
Former nurses believe the Grey Lady is the spirit of a former woman patient, who died at the hospital, seeking company in an afterlife.


8. St. James Theatre, Wellington.
There are numerous ghosts reported to haunt this theatre.
According to Moonslipper.com, one of the more regular sightings is the ghost of Yuri, a Russian performer who supposedly fell to his death from above the stage.
Yuri has been encountered playing with the lights, in particular switching them all back on again once the theatre has been locked up for the night.
There is also the 'Wailing Woman', a frequent apparition who is said to wail and moan about, and a boy's choir who is said to haunt the theatre.


9. The Masonic Hotel, Napier.
The Masonic was built in the 1860s, and then rebuilt after a fire in the 1890s and again after the 1931 earthquake.
In the hotel rooms there have been several natural deaths as well as suicides - and a chef once died in the hotel's bath. Witnesses report music that comes on by itself, lights that turn on without being touched, and apparitions that appear in the night. 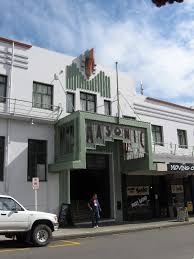 Perhaps New Zealand's most famous spot for supernatural beings, Spirits Bay is believed to be a jump-off point for spirits leaving this world.
According to Maori legend, during the night hours, groups of spirits and individuals can be seen moving down the beach to a certain point and then disappearing. These spirits are very focused on reaching a particular part of the beach and will not be distracted from their goal. 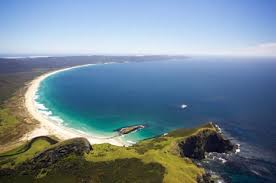