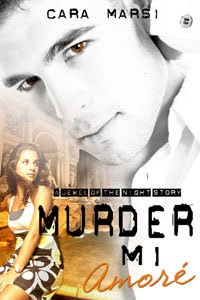 Happy release day to Carolyn Matkowsky w/a Cara Marsi for her novella, "Murder, Mi Amore"!
Carolyn is kindly giving away an e-copy of her story, so leave a comment to be in to win!

Thank you, LaVerne, for having me as a guest on your wonderful blog. 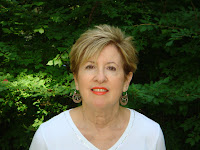 It's an absolute pleasure Carolyn : ) Could you tell us a little about what drew you to the series, a little about the process, and how long it took you to write it?

I saw the email from The Wild Rose Press regarding the Jewel of the Night Series in October 2009 right before I left for a two-week trip up the California coast. I thought about it while on my trip. The idea of a story about a stolen blue diamond intrigued me. I loved that it could be set anywhere in the world. I'd been to Italy in 2006 and I was itching to write a story set in Rome, which I love. Things just fell into place after that. The Wild Rose Press had a deadline of March 31, 2010. I'm glad they did because I might still be dawdling over the story. It's a novella, about 40,000 words, but I've never written anything so fast in my life. I started writing in late November 2009. My wonderful critique groups-my online group and my face-to-face group-helped. I got Murder, Mi Amore in before the March 31 deadline. Most of it is set in Rome. There's a chapter set in the small town in the province of Abruzzo, Italy, where my grandparents came from. The story ends in Las Vegas where my son lives.

What was it like writing for a series? Where did you come up with the idea for the plot?

This is the first time I've written for a series and it's a lot of fun. I feel a kinship to the other "jewels" authors. The plot just sort of plopped into my head. I thought about all those Alfred Hitchcock movies where ordinary folk find themselves wrapped up in intrigue. I wondered how it would feel to be an innocent American tourist in Rome who suddenly finds herself in a heap of trouble involving jewel thieves, terrorists, and a hunky, mysterious Italian. I brainstormed my idea with my online critique group and together we worked out the plot.
How smooth was the publishing journey and was it different to others because of the tighter deadline?
It went more smoothly than I would have thought. Having such a short deadline really forced me to focus.
Favourite part of the book/favourite character? Why?
I love my heroine Lexie. But I also fell in love with my hero Dominic. Lexie is an ordinary woman thrust into extraordinary circumstances and she meets her challenges head on. I love that quality about her. And Dominic is so strong and protective. He's been told Lexie is a terrorist, but she's the most unlikely terrorist he's ever known. He wants to protect her, not bring her to justice, which presents a dilemma for him. My favorite scene is the morning when Lexie and Dominic decide to trust each other and make love. It changes the dynamics of the story.
Anything else you'd like to add? How do your readers get a hold of you?
I'll offer a free copy of Murder, Mi Amore through a drawing of all those who leave a comment.
Please visit my website at http://www.caramarsi.com/
I love to hear from readers.

I also made a video trailer for Murder, Mi Amore. Here's the link:
http://www.youtube.com/user/CarolynMat2
BLURB:
Lexie Cortese is in Rome to forget. The last thing she expects is to meet a sexy Interpol agent who suspects her of being part of a terrorist plot involving a stolen diamond. Suddenly thrust into a world of murders, muggings, and kidnappings, Lexie doesn’t know what to think—or who to believe.

Dominic Brioni’s assignment is simple. Befriend the American and bring her to justice. Only Lexie seems like the most unlikely terrorist Dominic has ever met. Sweet, determined, and direct, she faces life with courage and fire, a fire that sparks his protective instincts and a longing for something more—something he allowed himself to hope for only once before.

But that woman betrayed him, and his boss isn’t about to let him forget it. With his career on the line and Lexie in danger, will Dominic learn to trust his heart before they both get killed?

EXCERPT:
Dominic sprang up and flew at the mugger, knocking him to the ground. The two men grappled, rolling together on the cobbled street. Lexie, her heart thumping wildly, looked for an opening to bean the mugger again, to give Dominic a better chance at overcoming him.
“Stop it! Stop it! Leave him alone!” The mugger ended up on top, and she whaled away with her bag, getting in any shot she could.
Shouts and the slap of running feet vibrated through the alley. The mugger swore, jumped up, and raced away, a few men giving chase. Several others helped Dominic to stand, yelling in excited voices, and gesturing toward where their attacker had disappeared.
Dominic winced in pain. Lexie looked down at his ripped, blood-soaked pant leg. “Dominic, you’ve got to get to the hospital. You’re bleeding.”
“I’m okay,” he said. “It is nothing.” Brushing dirt off his jacket, he turned to the men and said something in rapid Italian. With nods, they strode away.
Breathing heavily, Lexie disagreed. “You’re not okay. We’ll get a cab and take you to the hospital.”
He cupped her shoulders. “I’ve been through worse. I’m fine. Are you okay? Did he hurt you?”
“No. I’m…” The full impact of what had happened hit her. The adrenaline that had given her strength suddenly dissipated and she began to tremble. “I’m not okay.”
“Lexie.” Dominic moved forward to take her into his arms. She held on for dear life, needing his strength. He rubbed his hand along her back. “It’s okay, Lexie. We’re both okay. You’re safe with me.”
She clung to him. It wasn’t her imagination. Strange things were happening. She had nothing anyone could want. She didn’t know who to trust. Dominic said she was safe with him. But was she really?

Thanks so much for those insights Carolyn! For those commenting, the draw will be done Monday 2oth December. Good luck!

Posted by LaVerne Clark at 9:19 AM