Woohoo!!
Look what I won from a giveaway on Facebook
courtesy of Goddess Fish Promotions
Thank you so much you lovely ladies : )
(Now - where else can I show it off!)
Posted by LaVerne Clark at 1:48 PM 1 comment: 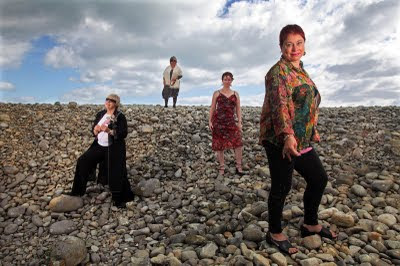 Rowrrr!! What a bunch of gorgeous girlies : )
Nelson Branch of Romance Writers of NZ
L-R Sally Ash, Cherie Le Clare, LaVerne Clark, Annika Ohlson-Smith
This was meant to be used for an article our group starred in for a very beautiful, glossy Nelson magazine called Wild Tomato, with the caption being Romancing the Stones but they went for something a little more homely in the end. Shame. I think it's a pretty cool photo and probably suits us - we're all a little bit quirky!
What does a Romance Writer look like? Are they glamorous women dressed up to the nines on the off-chance a handsome hero will come and sweep them off their feet? Or are they greasy-haired women sitting around in house-coats, dark circles under eyes fixed on a computer screen with mind's a world away from the one they're actually inhabiting? I don't know about you, but I tend to agree with the latter unfortunately, which makes dressing up for the photo-shoot above a whole lot of fun. Doesn't matter that it was freezing cold and our walk to that spot was ridiculously dangerous in high heels and my daughter was crying the whole time just out of shot. We looked GREAT, we had a lot of giggles and we escaped the everyday routine to act as supermodels for a while. What fun!
Posted by LaVerne Clark at 11:29 PM 11 comments:

Come visit me at Terry Odell's blog where I'm guesting, talking about my journey and writing for the American market.
Leave a comment to be in to win a PDF copy of Guardian of the Jewel!
The winner will be announced on Saturday on Terry's blog
http://terryodell.blogspot.com/2011/04/alien-writer-in-american-world.html
Posted by LaVerne Clark at 2:08 PM No comments: