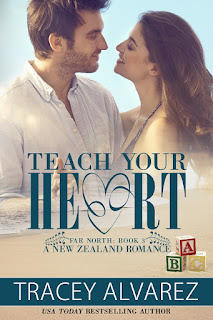 One of my very favourite authors has a new book out which I'm excited to share with you. Check it out!


Full Blurb:
Some lessons are harder to learn than others…

Doctor O-for-Awesome Owen Bennett is all about fixing broken things. Then the arrival of his orphaned nieces and nephew for twelve weeks causes his workaholic life to plummet into chaos. Hiring the beautiful but unpredictable Gracie Cooper as a live-in nanny might just get him out of a tight spot…or it could seduce him into a reckless affair.

After four years flitting around Europe, waitress/dog-walker/au-pair Gracie Cooper has returned home to New Zealand. Her plans to hang out with her big brother change when Owen offers a perfect solution to her crippling university debt. In spite of her sexy-stick-in-the-mud boss, she’ll spend fun days playing in Bounty Bay’s sand and surf with his cute charges. At summer’s end she’ll follow the sun overseas again.

Gracie and Owen’s opposites-attract connection is so unexpected and powerful that foundations are rocked. But some things aren’t easy to fix. Some past hurts can’t be run from forever. And the lessons they teach each other risk breaking their hearts.

“Morning,” he said. “Another early bird.”
“I saw the lights go on in here. I’ve been awake for hours. Touch of jet lag still.”
“Takes some adjustment.” Owen gave Gracie a wide berth and entered the walk-in pantry. “As does acclimatizing to the Far North summer,” he said over his shoulder. “Are you cold?”
Her laugh was a smoky chuckle. Fortunately, neither she nor Charlie could witness him closing his eyes for an instant to enjoy it.
“No, just lacking in some warmer-weather clothes,” Gracie said. “I like to travel light, so I gave away a lot of my summer things when the UK winter closed in.”
“I was hot last night.” His nephew’s sleepy voice drifted into the pantry. “And what’s for breakfast?”
“Uncle Owen’s making pancakes, and I was hot, too. In the bus I sleep in my knickers,” Charlie said and then giggled. “Will, tell Gracie the story about Uncle Owen and Uncle Danny in the bunny-hole.”
“What’s a bunny-hole?” Gracie asked.
Owen snatched the baking powder from the shelf and ducked back into the kitchen. “It’s a space under the main floor of my parents’ bus down the back. Big enough to fit a small set of bunks. Daniel and I used to share it.”
“You lived in the house bus, too?”
Gracie sat bolt upright on the barstool, but before Owen could answer, Charlie tugged on her elbow.
“Hey! It’s Will’s story!”
“Sorry.” Gracie stroked Charlie’s hair, which stuck out in wild corkscrew curls. “Tell me about the bunny-hole, Will.”
Owen moved to the fridge and opened it. He’d need the cool air if the story he suspected was the one his mum had passed on to the kids.
“Weeelll,” said Will, relishing the role of storyteller. “The bunny-hole bunks are up against the window, so you gotta remember to close the curtains if you’re on the top one. One day, when Uncle Owen was little, he forgot to close the curtains and he woke up to see people laughing at him as they walked past. Because he only had his undies on and nothing else.”
Charlie clapped a palm over her mouth but it didn’t muffle her high-pitched giggles.
“Oh dear.” Laughter rippled beneath the surface of Gracie’s voice. “I hope they were clean undies, Owen.”
Bunny-hole, rabbit hole. He’d fallen down one of them into a nutty world where discussing underwear choices with a woman he’d just met was appropriate breakfast conversation. “Clean Spiderman ones, yeah.”
Owen pulled out the tray of eggs and placed them on the counter, turning to find Gracie’s gaze once again on him—at ass height. This was a whole new sublevel of the rabbit hole. Did she wonder if he still wore Spiderman underwear? Or maybe she was checking out his attributes for some other reason.
He grabbed a whisk from the utensil jar and pointed it. “Twenty-five years ago, I thought Spiderman was the ultimate in cool. Now I’ve moved past the tighty-whities stage—so can we please stop laughing at my underwear choices and change the subject?”
Charlie climbed onto the lower rung of Gracie’s barstool and whispered into her ear. This time, his niece managed a whisper he couldn’t overhear and two spots of rosy pink appeared on Gracie’s cheekbones.
Owen cracked an egg into the mixing bowl one-handed. “Want to share with the class?”
“Girls don’t share secrets,” said Charlie. “Eh, Gracie?”
“That’s true.”
Since the spots had grown larger on Gracie’s cheeks, curiosity burned in his gut. There was another darting glance to the fly level of his shorts. Interesting.

Author Bio:
Tracey Alvarez is a USA Today Bestselling Author living in the Coolest Little Capital in the World (a.k.a Wellington, New Zealand). Married to a wonderfully supportive IT guy, she has two teens who would love to be surgically linked to their electronic devices.
Fuelled by copious amounts of coffee, she’s the author of contemporary romantic fiction set predominantly in New Zealand. Small-towns, close communities, and families are a big part of the heart-warming stories she writes. Oh, and hot, down-to-earth heroes—Kiwi men, in other words.
When she’s not writing, thinking about writing, or procrastinating about writing, Tracey can be found with her nose in her e-reader, nibbling on smuggled chocolate bars, or bribing her kids to take over the housework.
Follow Tracey on Twitter as @TraceyAlvrezNZ or Facebook as http://www.facebook.com/TraceyAlvarezAuthor
Her website is http://www.traceyalvarez.com and don't forget to sign up to her newsletter here: http://bit.ly/JR3Asu 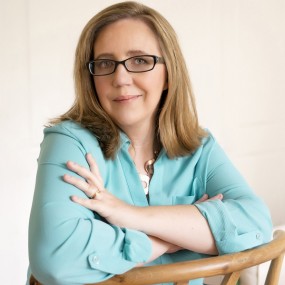 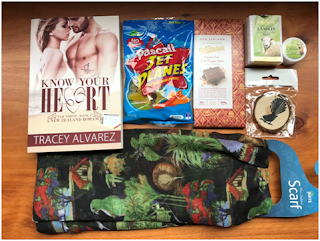 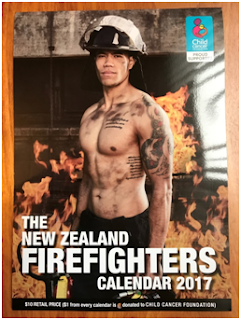 To Enter: Just click on the below Rafflecopter giveaway links below.
To qualify for the bonus 5 entries, you'll need to purchase Teach Your Heart and answer this question in the space provided in the rafflecopter. The question is: What is the first 5-word sentence at the beginning of Chapter 17?
* Prizes are not exchangeable for cash or anything else.
* All due care will be made in ensuring the prize arrives at the winner’s address, but I am unable to refund prize value in any way should it not arrive due to postal disaster.
* Entries close on December 7th and winner will receive a direct e-mail from me shortly after – so please ensure my e-mail address is added to your safe/contacts list. If I haven’t had a reply from the winner in 48 hours, I will redraw a new winner.

Rafflecopter Code: a Rafflecopter giveaway
Posted by LaVerne Clark at 9:40 PM No comments: